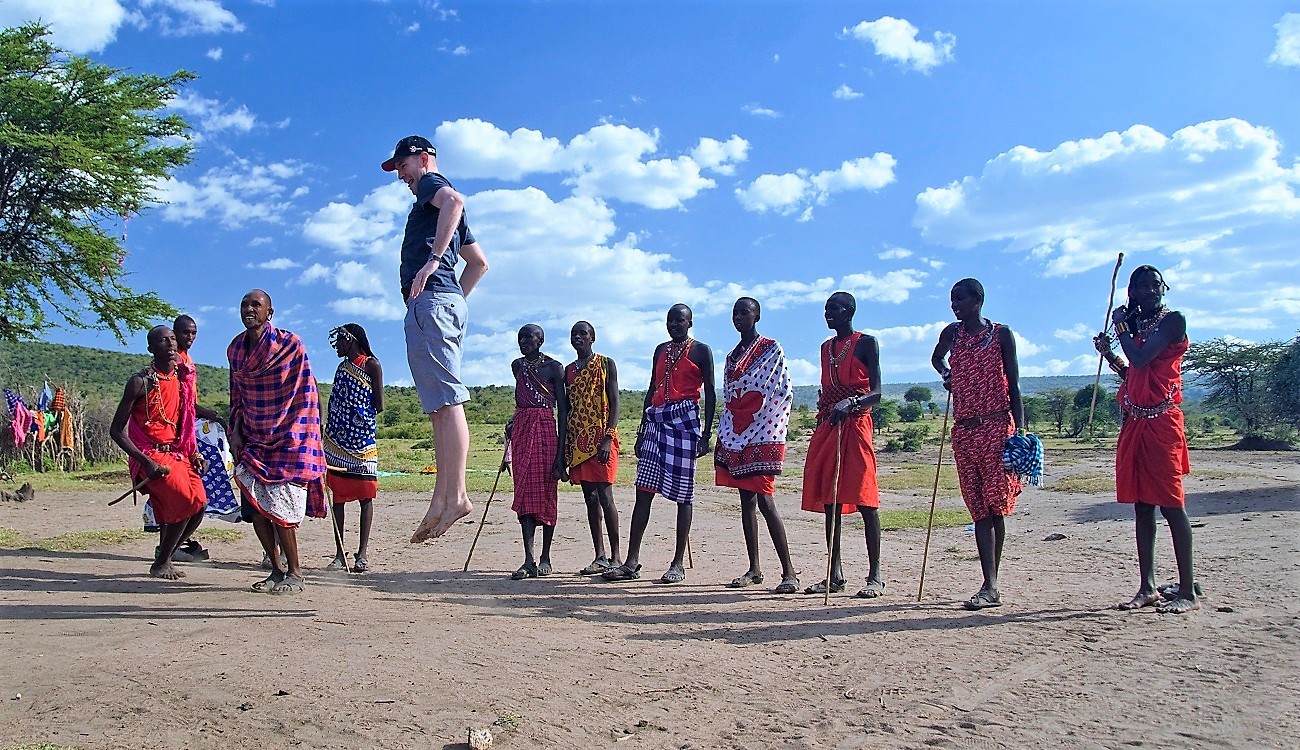 Discover Masai village tours on a layover in Nairobi NBO airport and immerse yourself in the culture of one of the most popular warrior tribes in Africa. A visit to a Masai village will bring you close to these guardians of Kenya’s wildlife; learn how they live among dangerous animals, how they dance, and how they fight. The Masai tribe ritual of manhood involved the killing of a lion until wildlife conservation put a stop to this practice not so long ago.

Get lost away from civilization and meet one of the highly celebrated tribes of Kenya. The Masai have retained their cultural identities even at the onslaught of modernity and technology. Only a Masai Moran (warrior) will don his traditional tire sandals, a red ochre braided head and wear a long red wrap around Kikoi; but beneath it have the latest model of smart phone.

The Masai have not completely abandoned their culture at all. This has endeared them to visitors who want to see how they live in their villages. The Masai people are a warrior tribe and in the early 1800 had dominated most of the other tribes with frequent cattle raids where they would take away young women to marry the warriors and livestock from neighboring tribes like Kikuyu, Akamba, Kalenjin and others. They at this time occupied almost a half of the area now called Kenya due to their exploits.

Your guide will pick you up from the airport and drive towards Amboseli national park. The best Masai villages are next to the park so you need to have enough time to do the tour. You can do the Masai village layover tour only if you have more than 12 hours layover. There are few Masai villages worth the effort near Nairobi which could be attributed to the modernization of those living near the city.

The drive goes through the Kapiti plains which is the domain of the Masai tribe. You will see a lot of wildlife along the way as you drive to Amboseli. The road is awash with road signage warning you to watch out of wildlife. The Masai in fact live among all these animals and they will never hurt an animal intentionally. You will see the occasional Masai Manyatta (homestead) surrounded by a thorn fence to keep away the lions at night and secure their livestock.

Brach off into Oloitoktok road at Emali and continue south west towards the Tanzanian border. At Kimana, branch off right into a dirt road that leads to the Kimana gate. The Masai village is located just before you get to the Amboseli Kimana gate.

The Masai women and men will welcome you with a dance and a local guide will immediately welcome you to the village. The Masai guide will explain the various aspects of their culture including birth rituals, initiation rituals into different age sets, marriage rituals, and war dances. You will have a chance to go into one of the houses which are made of sticks, earth and plastered in cow dung.

Join the Masai women or the Masai Moran’s into performing their respective dances. The aduma jumping dance of the Masai warriors is a favorite with most male visitors as the Masai will challenge you to match jump height. This is not as easy feat, as the Masai seem to have some levitation powers when they do the jumping dance. You will also learn how they make fire out of two sticks and dry elephant dung while watching cattle for days in the wilderness. They will teach you how to throw a spear and how to do traditional archery.

5.      Buy a Souvenir & Support the Masai at the Village Maasai Market

As you wind up your Masai village tour from NBO layover, you will be invited to support the village by buying some of their souvenirs at the Masai market. These mainly bead jewelry is made by women and the money they make helps them keep their children in school despite frequent drought ravages that afflicts the Masai.

6.      Masai Village Tour on Layover at NBO; the Itinerary

0700hrs: Watch the hundreds of animals by the road side and the Masai Manyatta dotting the plains

1000hrs: Arrive at the Amboseli Masai village at Kimana gate and start our Maasai layover tour

1200hrs: Buy some artifacts and curio items at the Masai village

1300hrs: Go for a buffet lunch at the Kibo safari camp or Sopa lodge

1800hrs: Drop off at the NBO Airport for your connecting flight after a daylong Masai village layover trip

There are other Masai villages in Masai Mara which you can visit if you have at least 2 days. We also go on Masai Mara 1 day safaris and you can go on one if you have a full day to spare as the drive is longer. Masai Mara is 280km or at least 6hrs from Nairobi. Going to Masai Mara, although far, has its advantages in that you will also do a game drive in one of the most popular and rewarding game reserve in Kenya.

Book your Masai Village day tour from NBO Airport layover from Robert, Send a whatsapp message on +254722661827 or send us an email at info@sojournsafaris.co.ke