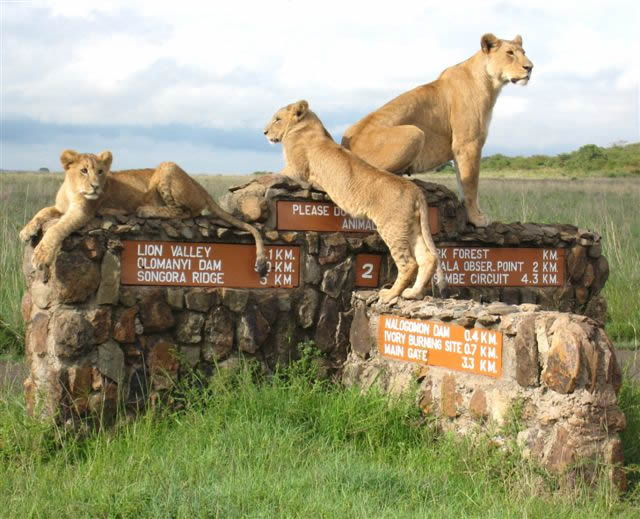 Explore Nairobi National Park in a game drive safari tour and drive to see hundreds of animals. Visiting Nairobi Park is easy as its only 7minutes from your hotel in the city cbd. Nairobi national park is the only park within the limits of a capital city in the world.

These are not the only animals in Nairobi national park. There are hundreds of other animals including baboons, buffalos, elands, impalas, gazelles, hippos and crocodiles among many others.

1. View Lions in a Game Drive

Nairobi has a healthy number of lions that you will be able to view sometimes just right next to the road. Lions in Nairobi national park are easy to see since the park is only 117sqkm and their numbers keep on increasing. The Nairobi park lions can be seen mating or in groups of large prides in the plains. There are some lions pride that prefer certain areas and can almost without fail be seen there on a daily basis.

You will be amazed at how many rhinos you are able to see in Nairobi national park 4 hr game drive. Though the game drive is 4 hours, the rhinos in this park are such that they are a guarantee to see. The white rhino is the more docile of the two species and can therefore be easily seen near park roads. The black rhino however is very elusive and shy and you will at best be able to see a fleeting view of its disappearing rear end. Fortunately, the white rhino ifs the bigger of the two and that helps when you see it close.

3. Track Leopards in Gorges and Forest

Seeing a leopard is one of the most difficult things to do in your safari anywhere in Kenya. These animals are masters of camouflage and you will only see it when it wants you to see it. There is a healthy population of leopards in Nairobi national park with some individuals known to frequent certain areas always. However, seeing these animals is a huge luck but you have a best gamble early in the mornings but even better later in the evenings. Leopards are mostly nocturnal animals and they start getting restless after 6:00pm in the evening. The rest of the day is too hot for these sneaky creatures for them to venture out enough to see them.

4. See Hippos and Crocodiles in Athi and Hyena Dams

You will be able to see the man-made dams of hyena and Athi dams which are the largest during your game drive in the Nairobi Park. These dams have resident crocodiles and hippo families which can be seen during the day. Hippos are especially shy during the day and will not venture out of the water while the crocodiles are always on the banks basking in the sun. If you are lucky you will see a few hippos out of the water from 6:00pm as they go to graze in the grass.

5. Watch Giraffes and other Animals

You will also be able to watch giraffes feeding just next to the game drive tracks. The giraffes in Nairobi national park are accustomed to vehicles and they rarely move a muscle even when they are feeding just a few feet from the road. Nairobi national park is home to some beautiful Masai giraffes and also many other animals including baboons, buffalos, impalas, wildebeests, zebras, gazelles, hartebeests, elands and many others.

Nairobi national park half day tours are offered either early at 6:30am up to 11:00am and again at 3:00pm up to 6:30pm. The reason of a late start for the afternoon game drive is due to the hot sun when animals are all hiding away. From 3:00pm, the animals start to venture out again and this is the best time for a game drive until dusk.